Conversations about the Zimbabwean crisis had been building up over the last week of July following the arrest of activists Hopewell Chinono, Tsisti Dangaremba and others.The activists were arrested for alleging that the Zimbabwean government has engaged in COVID-19 fund corruption, food corruption and infringement on freedom of speech. Dr. Nkosana Moyo tweeted highlighting the reasons behind the crisis faced by Zimbabweans. The tweet received over 5 700 likes and 2 800 retweets. 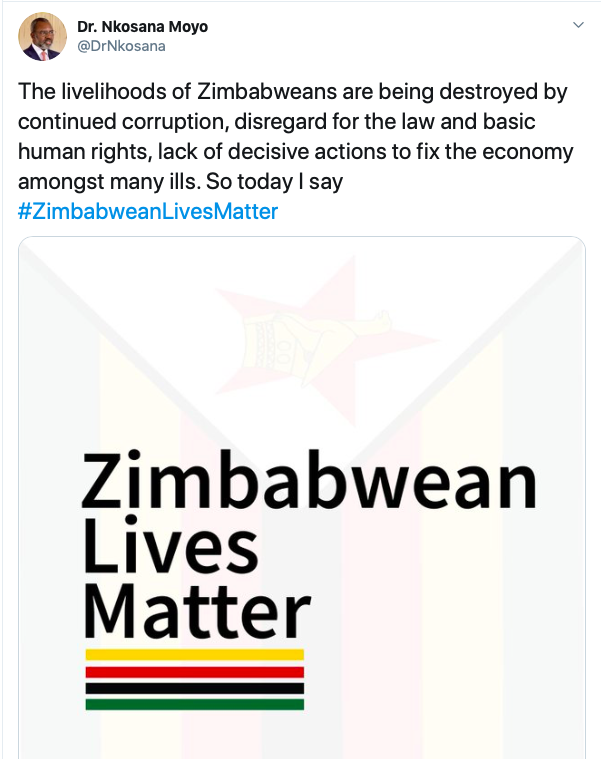 @OrdinaryCitizein tweeted about arrested activist Hopewell Chinono, writing that “today marks the 14th day Hopewell Chinono is in prison.He’s a journalist who exposed the looting of Covid-19 funds worth US $60 million.The Minister of Health who orchestrated the looting sits in the comfort of his home with no accountability. #FreeHopewell #ZimbabweanLivesMatter.”This tweet received over 1 600 likes and 1 300 retweets.

Twitter users also shared some solutions and called for action against the corruption and infringement on humans rights by the Zimbabwean government. Africa Fact Zones explained that the hashtag #ZimbabweanLivesMatter isn’t only for raising awareness around the social injustices faced by Zimbabwean citizens; it is also used to campaign for the release of the arrested activists.They asked for Zimbabweans and others to speak out against the Zimbabwean government. The tweet received over 2 400 likes and 1 100 retweets. 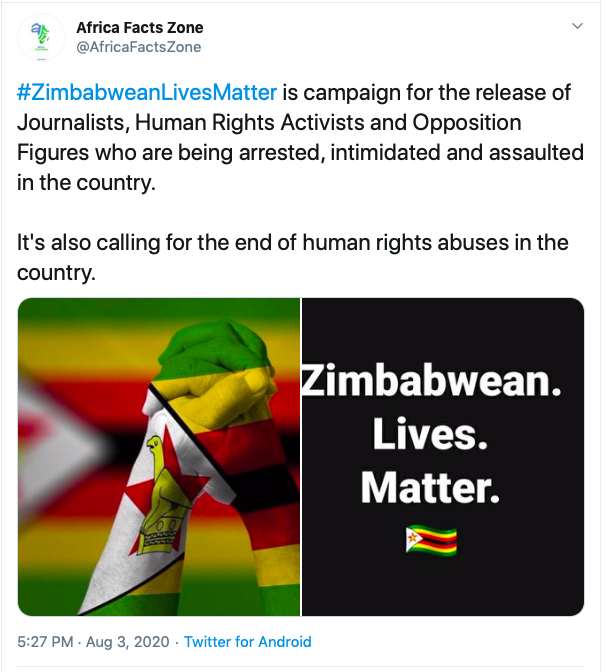 South African personality @AneleMdoda also asked if social media is an effective platform for the civilian unrest happening in Zimbabwe, writing “What can be done for Zimbabwe besides retweeting guys. I don’t mean to dilute anything but really what does hitting retweet do? Who are the tweets putting pressure on?”

A response from @Neli_Ngqulana highlighted the use of social media platforms to create awareness by writing “The tweets and hashtags keeps [sic] what is happening there in circulation and in the news. As South Africans, we can push our President to say something/condemn/ send a delegation. Our Pres is also the Chair of the AU, he can also use that position to put pressure on Zim…” This post received over 1 700 likes and 372 retweets.

South African Breweries (SAB) announced on Monday that they would be halting investments worth around R5 billion over the next 2 years because of the alcohol ban in the country. SAB Finance Vice President Andrew Murray explained that these plans have been halted because so far, they have lost 12 full trading weeks as a result of the ban on alcohol sales, leading to significant operating uncertainties.@TimesLIVE tweeted a link to their article on the announcement by SAB, receiving more than 200 retweets and close to 300 likes.

One responder remarked “Oooh blackmail springs to mind. What happened to their #ResponsibleTogether campaign? #savemylivelihood efforts.” Following this response, another person commented “Alcohol is destroying our communities just like drugs. Good ridden”In response to this comment, @AFranzsen said “it is not alcohol which destroys your communities. It is people. Your people! If there is no alcohol, more people will turn to drugs. Do not delude yourself! Focus on educating your people, and don’t deprive sensible mature people of pleasures which they enjoy responsibly!”

@SayEntrepreneur tweeted: “Consol Glass has lost over R1.75 bn sales and production due alcohol ban. South Africa’s glass packaging industry’s sales are made up of 85% alcoholic beverages. Consol may shutdown 8 of 14 furnaces resulting in over 300 job loses.”This post has been retweeted more than 200 times.

Possible lift of the ban

On 02 August 2020, @mikeratcliffe tweeted a link to a Biznews article explaining that the alcohol industry had called for a review of the alcohol ban because pressure on hospitals had eased.SAMRC President Dr Glenda Gray and Prof Charles Parry, Director of Alcohol, Tobacco and other Drugs Research Unit of the SAMRC advised in a recent interview that the excessive pressure anticipated from the COVID-19 pandemic has not materialized and that lifting the ban should be considered.@mikeratcliffe’s post was retweeted close to 200 times and it received more than 400 likes. Responding to @mikeratcliffe, @nigel0401commented that “people have lost jobs. #savejobs” 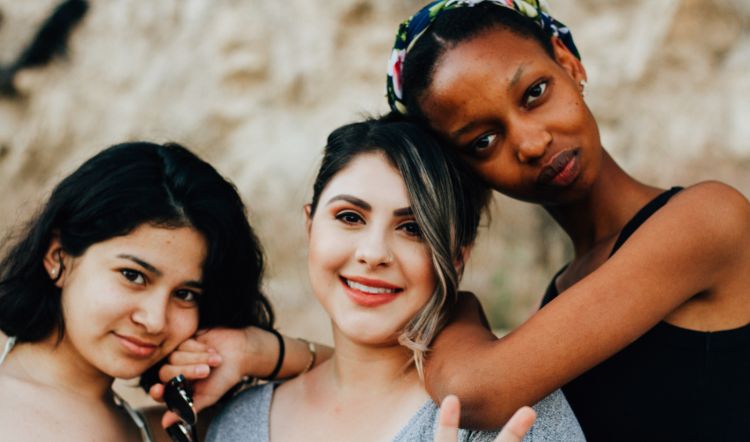 @LadyRea [tweeted](https://twitter.com/LadyRea/status/1290571599352074240) that Dischem will be doing pap smears and breast exams for R180 during the month of August in celebration of Women’s month. Her tweet was well received with more than 7 500 retweets and nearly 6 000 likes.

Also on the topic of women’s month, @HulisaniRavele tweeted that corporates should spare female employees the women’s day brunches and soirées and rather use the money to bump their salaries up so that they are in line with that of their male counterparts. This post has been retweeted more than 2 300 times and received close to 5 500 likes. 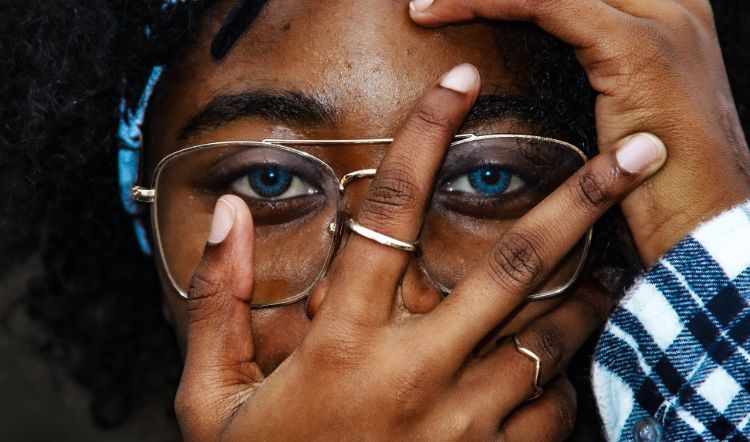 The first week of August featured conversations about the nuances of black identity, black empowerment, black governance and black business that received a significant amount of attention on Twitter. These issues trended under multiple drivers in the top topics by snapshot, volume and burst.

Division within the Black community

5 August – conversations about the nuances of black identity garnered considerable traction amongst Twitter users. Several users expressed their reflections on the notion of colourism. On Wednesday 5 August 2020, @Sethuuuuuuuu shared a three-part thread with an initial tweet that read, “The black racial group is so divided tbh. do you see white people fighting over light skinned and dark skinned within their own racial group?” This tweet received 177 retweets and 309 likes. On the same day, @mpumzn [shared](https://twitter.com/mpumzn/status/1291002330909937664) an anecdotal tweet which read, “people who grew up calling us “mnyamane” and “sash” are now saying that colourism isn’t a thing?” This tweet generated 380 retweets and nearly 700 likes.

Some users shared their thoughts on the complexities of romantic relationships in the black community. @ZiphoratorSA tweeted “Some Black people are so used to failed marriages and relationships , that when they see a happy couple, they immediately make up malicious rumors like ” IT WILL END IN TEARS” just because happiness❤❤is such a rare thing in the black community and they cannot relate.” This tweet got 275 retweets and almost 600 likes.

Other users expressed views that highlighted the prevalence of homophobia within the black community. @zamagembe tweeted 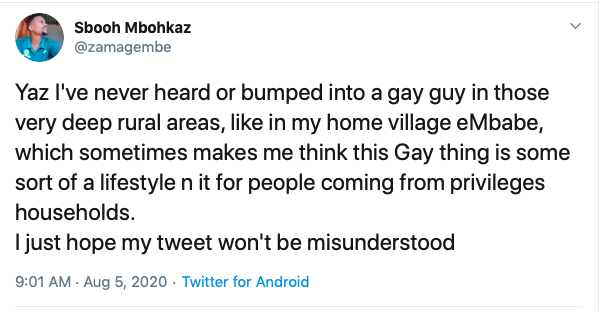 Conversations about governance in South Africa trended throughout the day as Twitter users expressed their frustrations with the current administration. On Wednesday 5 August 2020, president of the Mining Forum of South Africa @BlessingsRamoba tweeted,

Later that day, @UnathiKwaza [tweeted](https://twitter.com/UnathiKwaza/status/1290995379429875716) “Top, well paying government jobs are reserved only for Black people in South Africa. But they still blame white people for being failures in life.😂😂😂.” This tweet generated 133 retweets and 520 likes.

The Zimbabwean government has continued to arrest those critical of the government. A tweet authored by @advocatemahere informed readers that Hopewell Chin’ono has been imprisoned in Zimbabwe, stating that he is a political prisoner. This post was a significant driver of volume yesterday having been retweeted 4600 times and liked 5600 times as of 09:00 on 7 August. 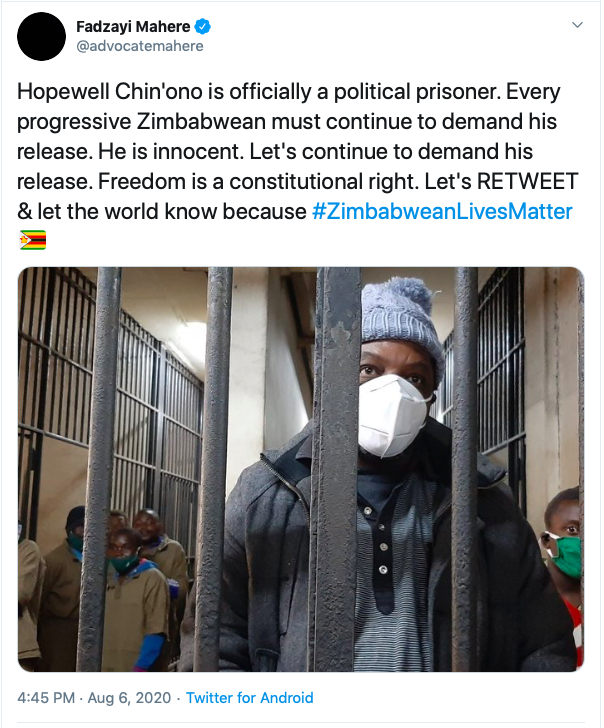 A similar tweet was authored at 16:19 last night by @Wamagaisa stating that a 22-year-old Zimbabwean woman has been arrested for allegedly “insulting the president” in a WhatsApp group. This tweet had been liked 588 times and retweeted 533 at the time of writing this morning.

Various leaders have spoken out condemning the human rights abuses occurring in Zimbabwe. The United Nations Secretary General released a statement urging the government of Zimbabwe to respect its citizens’ fundamental human rights. 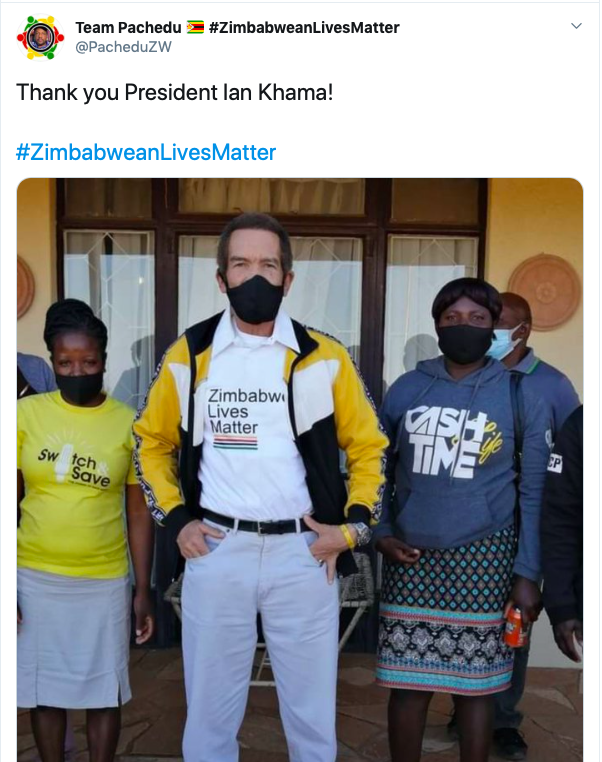 Trevor Ncube (@TrevorNcube), a Zimbabwean newspaper publisher, tweeted yesterday that he supports the “right of citizens to protest peacefully” and he is “against corruption, abductions, [and] torture”. The three media items, all published on Twitter on 6 August had received well over 15 000 user engagements as of 09:00 on 7 August.

Historically, stokvels have been a standard method of saving money amongst many South African communities. However, since the national COVID-19 lockdown, a new form of stokvels called WhatsApp gifting has surfaced. These WhatsApp stokvels have recently been outlawed. TV news channel @Newzroom405 shared a Twitter poll in a tweet that read “Lockdown has led to a rise in retrenchments and many salary cuts. This has prompted many to sign up for WhatsApp gifting. The National Consumer Commission says it is more of a pyramid scheme than a stokvel and has declared it illegal. Do you think this is fair?” This poll generated 299 votes, 65 comments, 5 retweets and 3 likes. [Final Results: Yes = 50.8% and No = 49.2%].