The taxi strike and its many layers 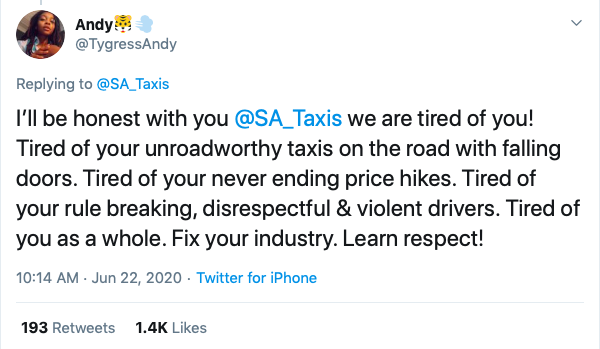 Information about the taxi strike was widely shared on Twitter. This topic dominated conversation by both volume and burst. Burst describes how significantly the topic was covered over the 2nd half of the day, and provides a strong indicator for the trend continuing over the next day.

Conversations around the taxi strike in Gauteng trended on social media following the industry’s disagreement with government over the COVID-19 relief grant. On Monday 22 June 2020, Twitter user @SuperiorZulu expressed support for the strike saying: “It’s interesting to note Gautrain which transports less than 150 000 people per day receives R1,6 Billion in Government Subsidy from taxpayers while the Taxi Industry which transports 15 Million People a day or 26% of SA’s Population receives No Government Subsidy. #TaxiStrike.” The tweet gained traction with 1 200 retweets and 2 800 likes.

On the same day, @AdvBarryRoux tweeted: “Santaco says it regrets leaving commuters stranded this morning. Taxi drivers say the want R20 000 per taxi from government (around R5 billion), which is far from what’s being offered currently (R1 billion) #Taxistrike.” The tweet received 98 retweets and 376 likes. 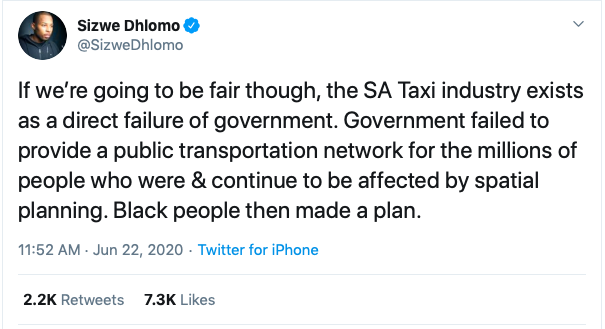 In a thought-provoking post invoking South Africa’s Apartheid history @SizweDhlomo pointed out that the government’s failure to provide suitable public transport for the people affected by historical spatial planning is why the Taxi Industry exists in the first place. Tweeted at 11:52, Dhlomo’s post received over 2 000 retweets. Responding to Dhlomo, some commentators felt that the government is not to blame. Some felt that SANTACO is at fault, while others blamed taxi bosses for being violent individuals, out of the government’s control. @robzinterris commented that Dhlomo would make a good leader and that the people would vote for him, so long as he ensures that the taxi industry pays taxes.

Earlier in the day, @SATaxis [tweeted](https://twitter.com/SATaxis/status/1274961800807751681) that the taxi industry does contribute to taxes through the manufacturing industry, saying that they buy 1 000 vehicles a month, inclusive of VAT. This post was retweeted 2 000 times and received over 3 000 likes. However, not all commenting on the issue showed support.

@TygressAndy commented that South Africans are tired of unroadworthy taxis with falling off doors and disrespectful, rule-breaking taxi drivers. This comment was retweeted 185 times and received 1 400 likes.

Following a dispute over government’s financial compensation for taxi operators during lockdown, SANTACO called on all taxis to fill their vehicles to 100% capacity and resume long-distance operations. eNCA shared the clip by Phillip Taaibosch in a tweet which received over 1 300 retweets and over 1 600 likes.

A tweet by @nmadzenga quotes the SANTACO president saying that no permits should be required for travellers commuting between the provinces, contrary to current lockdown regulations which prohibit inter-provincial travel without permits. The tweet received almost 700 likes and has been retweeted 340 times. 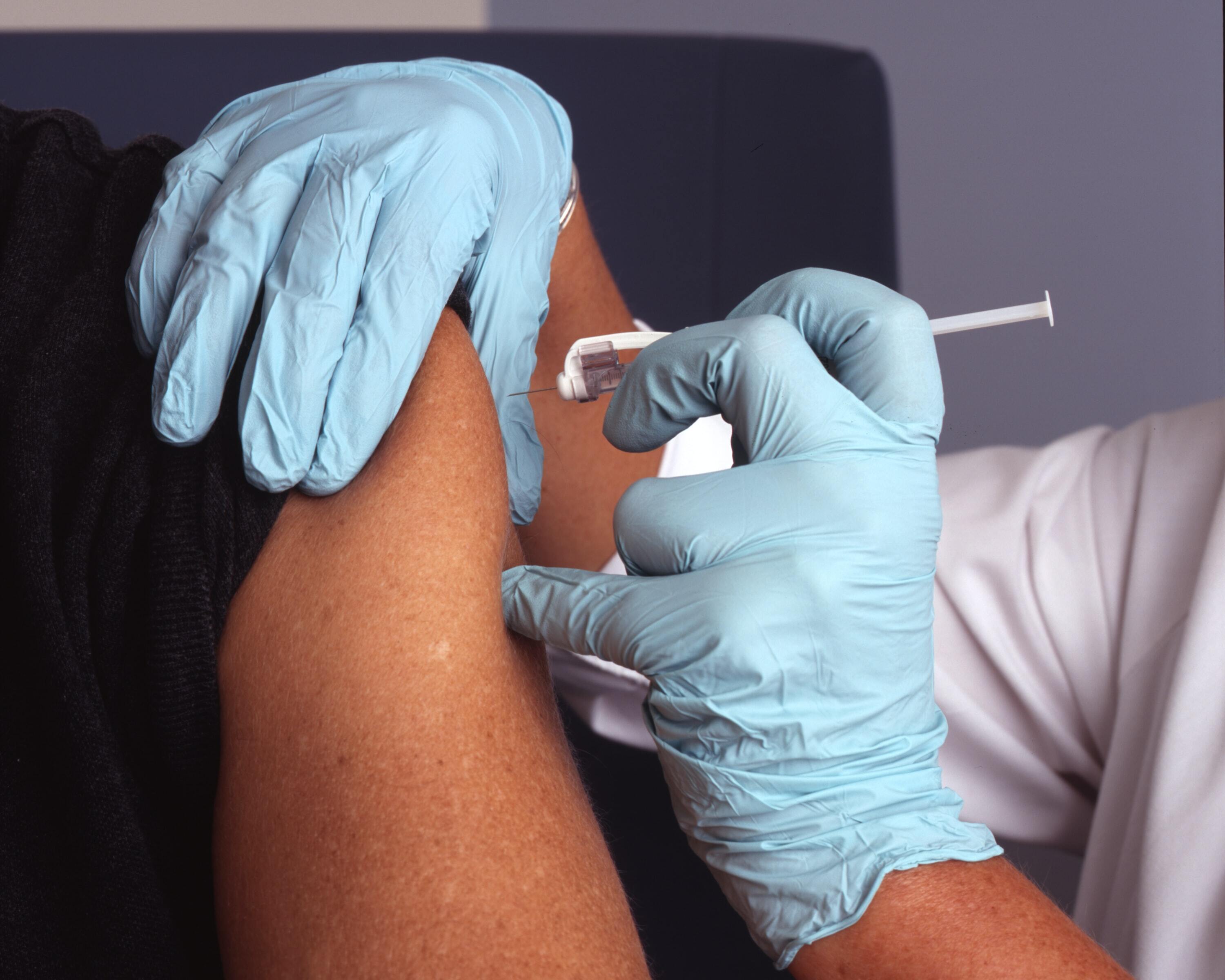 Wits University’s announcement of their first clinical trial for a COVID-19 vaccine received over 800 retweets and over 1 300 likes. “Wits University” was also a top trending topic, with discussion focussed on treatment and collaboration alternatives, as well as funding.

The trial by Wits is in collaboration with the University of Oxford and other institutions that are funded in part by the Bill and Melinda Gates Foundation. The Foundation’s involvement sparked debate, with some opposing the trial being conducted in South Africa.

The Bill Gates and other vaccine conspiracies pop up again

@AndyChocol8 tweeted: “Bill Gates is hiding behind Wits University and Oxford University to test his vaccine in Africa, South Africa. It seems he orchestrated this quite well. He wants to kill us! Why must he come to South Africa when France and Italy have the highest deaths???!”. This tweet received approximately 720 likes and 450 retweets.

Tweets by @robzinterris, which received over 1 000 likes and 230 retweets, and by @lebokarel, which received approximately 70 likes and 40 retweets, echoed this sentiment. The #SayNoToWitsVaccine hashtag received over 130 mentions. Some of these posts, such as one by @EddieMoyoM3, propose conspiracy theories around vaccine profiteering. Such theories did not seem to gain much support, as @EddieMoyoM3’s tweet received only 20 retweets and 16 likes.

This narrative, which seems to vilify the vaccine trial taking place in South Africa, appears to ignore reports by several publications noting that trials are also taking place in many other regions and countries including Germany, China, the UK, USA and Brazil. Such reports include articles by The Washington Post, Cape{town}etc and the Council on Foreign Relations. 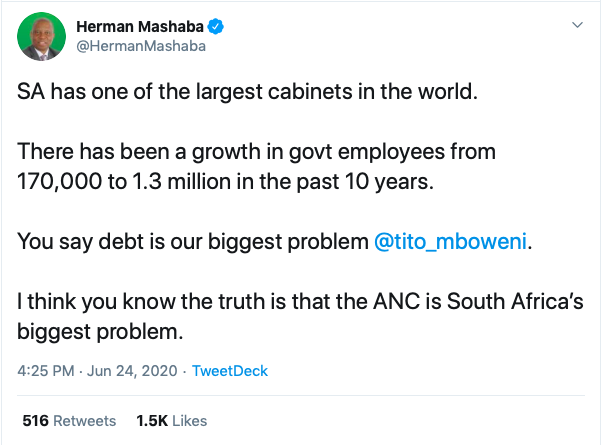 Following the supplementary budget speech by Finance Minister Tito Mboweni, the ANC was criticised for the country’s problems. @Fin24 shared a quote by the Minister: “Never before has government worked together so closely with the private sector, labour, community and the central bank.” The tweet received just 5 retweets and 9 likes.

@Richards_Karin tweeted, “Gvt scratching around borrowing R1 billion here and R1bn there, in order to fund the giant budget shortfall. And yet, they continue to throw away R1 billion every month on the cigarette ban. Why? Why would you persist in doing that? It is simply incomprehensible.” The tweet was retweeted 328 times and received almost 1 000 likes.

Rona is still dominating our conversations 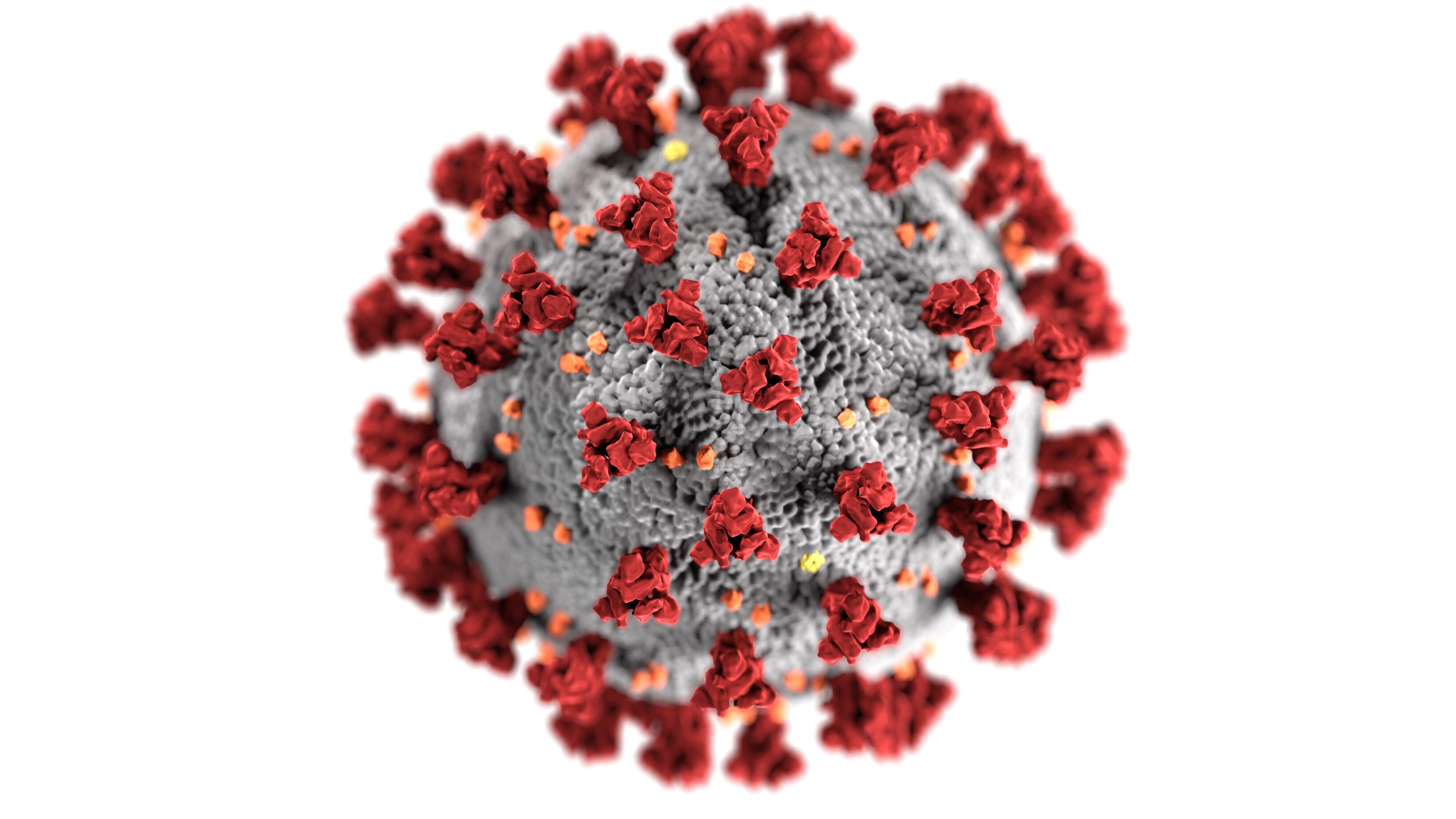 Tweets about the grave impact of the COVID-19 pandemic on South Africa drove the highest volume of conversation on social media over the weekend: “Covid” was mentioned over 43 000 times and “new cases” about 6 000 times.

This follows the sharp increase in new cases reported by news outlets, including a SABC tweet about a new record for daily infections. Over 7 000 new cases were reported on Sunday, taking the total number of coronavirus infections to 140 000.

A doctor expressed the severity of the situation in a tweet by @KayEssRams, which was retweeted 6 400 times and liked over 8 000 times. The doctor said hospitals were under-resourced, and described how she had witnessed the death of three patients in her last shift.

@romanmaira_ urged people not to go to restaurants as many servers were allegedly testing positive. The tweet received about 200 retweets locally but was retweeted over 81 000 times internationally.

The business of black women’s hair 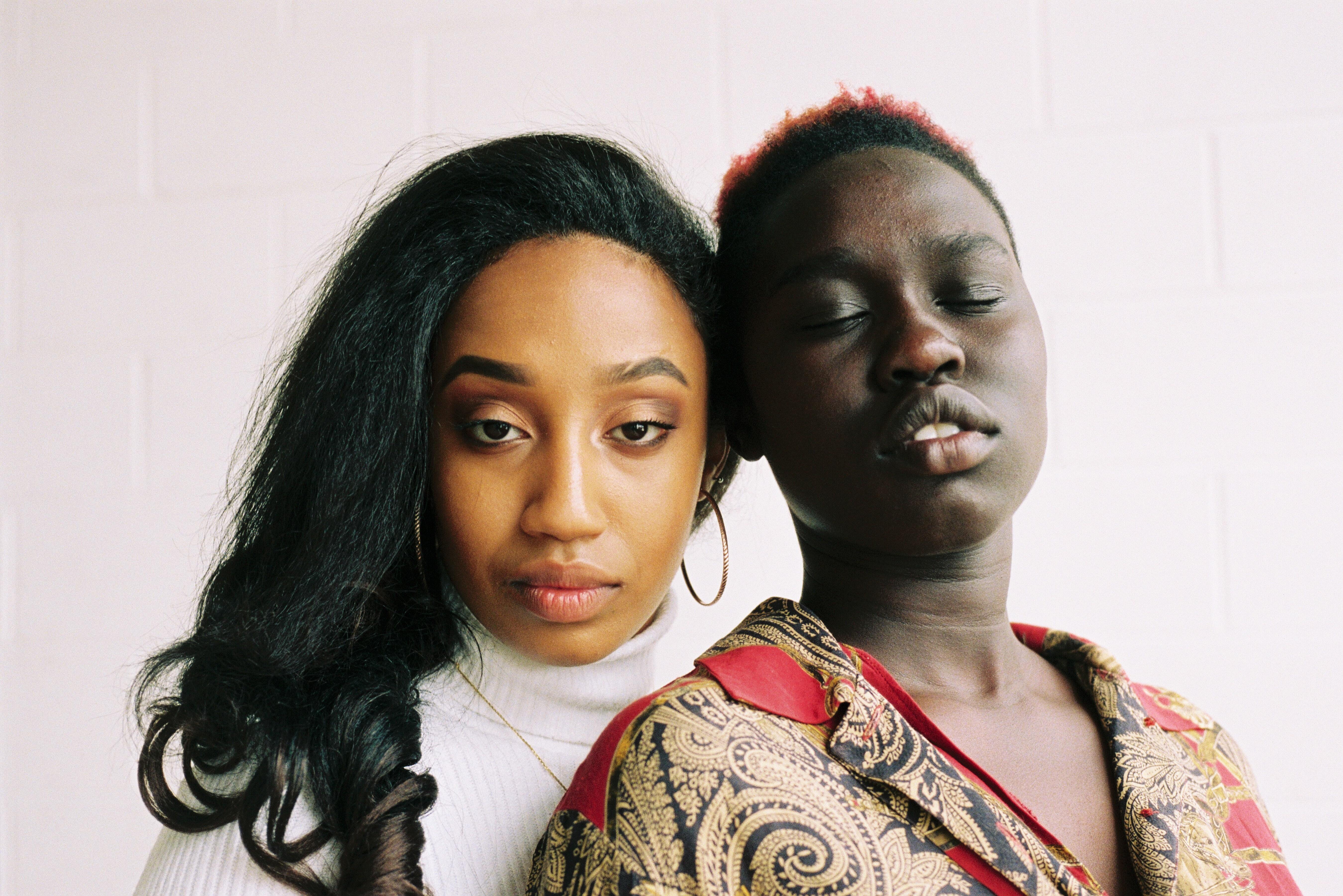 Over the weekend Twitter users discussed how money generated by hair products for black women should go to businesses owned by black women, and others called out celebrities who manufactured their products in Bangladesh.

“I genuinely believe black women should be the ones making all the money from black women’s hair. Here’s a thread of hair products owned by black South African women. Feel free to add more,” tweeted Miss Andisa. The tweet received over 5 500 retweets, 10 200 likes and 356 comments, including black businesswomen promoting their hair care brands and users giving reviews of products they have used.

Others commented on the absence of these brands in large retail stores. Fezeka commented, “I’m following all these brands, it’s a pity that I’ve only seen Nilotiqa and Afrobotanics in shops”. Andisa replied, “There’s probably a lot of red tape and funding issues that make it harder for most of the guys who just started. But I think we will see more of them getting to the shops soon.”

Farhan took to Twitter to expose the exploitation of factory workers by celebrities who manufactured their products in Bangladesh. She tweeted: “Kylie Jenner and Cardi B refuse to pay workers in my home country of Bangladesh during the Coronavirus pandemic, which is hitting the poorest people hardest. The majority of workers are women. This has affected 50,000 workers. Boycott these sick people.” The tweet received 591 retweets and 1 000 likes, with comments requesting signatures for a petition demanding pay for Bangladeshi garment workers. Others commented that Cardi B did not own a clothing business but was associated with Fashion Nova, a clothing brand.

A deep analysis on any of these issues is available on request.