The brutal murder of Tshegofatso Pule, a 28 year old pregnant woman, trended most of Monday 8 June. The initial tweets were pleas to help find her after she went missing. These were followed by the announcement of her death and calls for justice for her killing. @MbaliZuma1 posted her tweet on popular Twitter accounts asking Twitter users to retweet her post until Tshegofatso’s killer is found. One of her friends, @iamfooddoc took to Twitter to highlight how Tshegofatso was killed “This time it hit home! A close friend of ours, a daughter, a sister, an expecting mother! Found today murdered and hanged in a veld. What monster does that?? what kind of cruelty is this?#RIPTshego #menaretrash #justiceForNaledi”. The tweet received 768 retweets, 782 likes and over 100 comments. 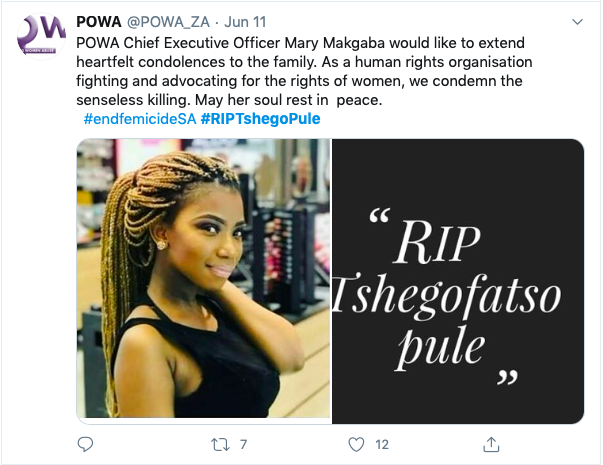 South African artist Cassper Nyovest took to Twitter to share his dismay that gender-based violence continues to plague our society in the face of a pandemic. He states in the tweet, “With everything that’s going on in the country. Men still find the time to kill women in South Africa. WHAT THE ACTUAL FUCK?”. With a potential reach of over 2 million followers, Cassper Nyovest’s tweet received over 8 500 likes, 1 700 retweets and 228 comments. The tweet triggered other Twitter users to comment on particular gender-based violence cases they know of, with Twitter user @Mmakobo_Thage describing a case in her neighbourhood, “They just murdered a lady around our hood bathong the lady was staying alone.. They robbed and killed her this early morning guys I’m not ohk yooh aowa”. Other users mentioned how difficult it is being a woman in South Africa and how mob justice and the death penalty need to be implemented to curb gender-based violence, while some blamed the influx in gender-based violence on African foreign nationals.

Following the horrific murder of Naledi Phangindawo in Mossel Bay, the hashtags #JusticeForNaledi (along with #JusticeForTshego after Tshego Pule’s murder) have been trending on social media. 25 Year old Naledi was hacked to death allegedly by her boyfriend, who handed himself over to the police. It was apparently not the first time the suspect had attacked her.

In a show of solidarity, local men in Mossel Bay organised an Imbizo for Naledi Phangindawo’s death. Twitter user, @MrCow_man, shared photographs of the Imbizo. The tweet gained traction with 240 retweets and 378 likes. 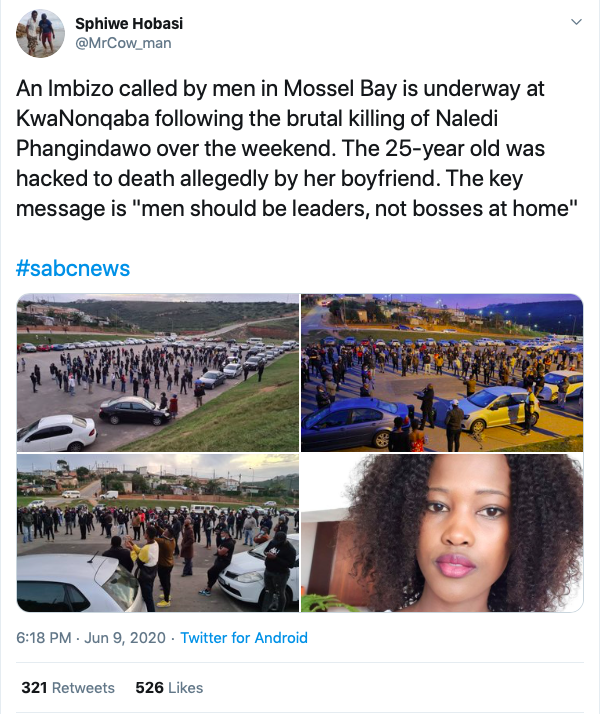 South African women and men are trying to grapple with the ongoing violence perpetrated against women and are trying to find ways of doing something!Twitter user @NokuphilaKhany1 shared a list of women who died at the hands of men in South Africa. The list included 403 names of women and each name started with “Let’s do it for..”.

The tweet received over 4 800 likes, 5 200 retweets and 161 comments. @WomenRaping started a twitter thread ‘Stop Raping Women’ that lists over ten men who have allegedly sexually assaulted women. The thread also includes screenshots of text messages between the alleged abuser and their victim that attest to the assaults having occurred. The tweet received 51 comments, 351 likes and 375 retweets.

How should we be dealing with GBV?

One of the recurring suggestions to curb gender-based violence is to reinstate the death penalty.@Yeezy_Dizzle tweeted “Honestly, the death sentence is needed in South Africa. You deny someone their right to live, you MUST also be denied your right to live #TshegofatsoPule” with most of the comments agreeing with her. The tweet received nearly 1 500 likes, retweets and comments. 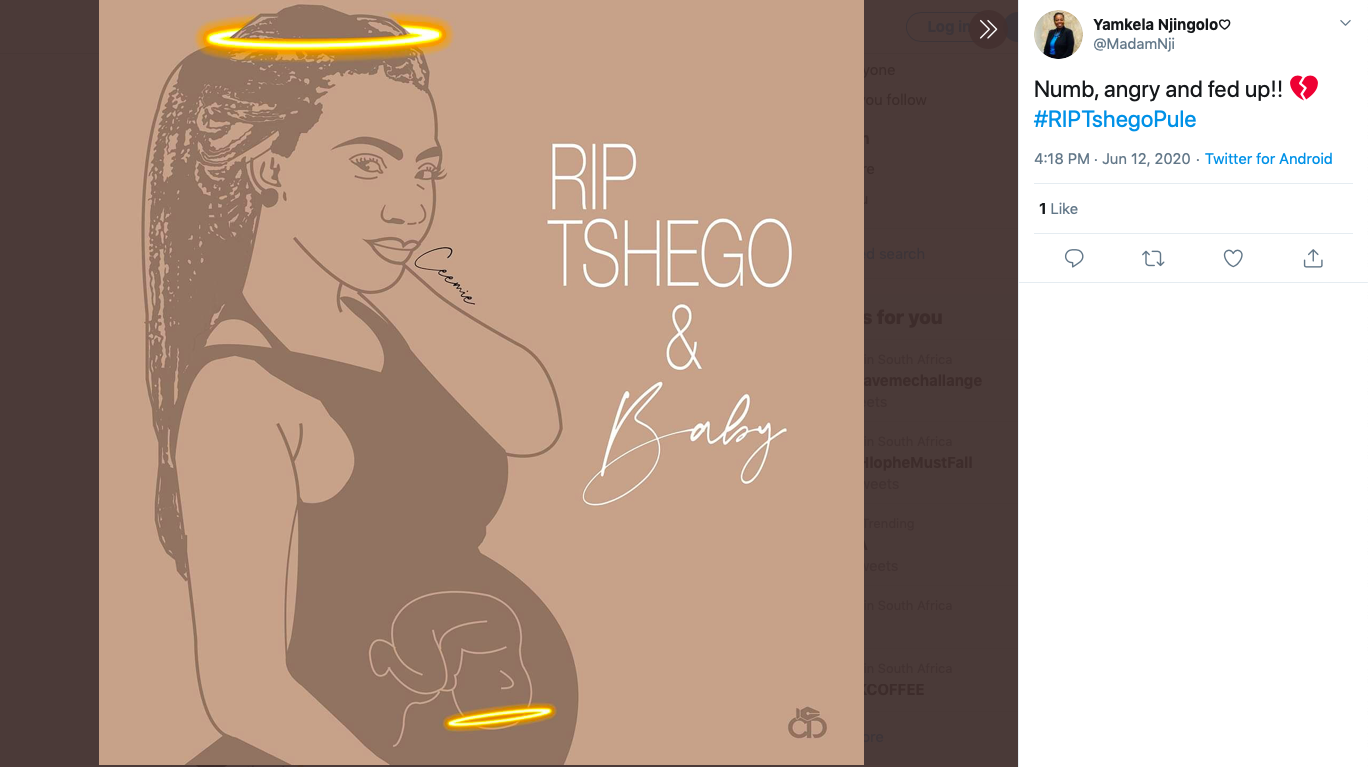 While @KaidyBee pleaded with the Minister of Police, Bheki Cele to protect women in South Africa and asked why he has been silent on the whole matter, “I wish Bheki Cele could invest the same energy that he invested while fighting alcohol, on protecting us. Women are endangered species in South Africa. But we still have the “not all men” brigade that is always ready to defend themselves when a woman dies in SA #TshegofatsoPule”. The tweet received over 700 retweets, likes and comments.

Men are the problem

The common narrative right now is about asking men to take responsibility, stand up, speak out and blaming men for the violence.

“The reason why South African men don’t want to have real conversations about rape and GBV is because they are the problem and they know it. There’s no animals or demon spirits killing and raping black women, it is black men qha” tweeted @sivmaroon. The tweet received over 1 200 retweets, 2 100 likes and 30 comments. 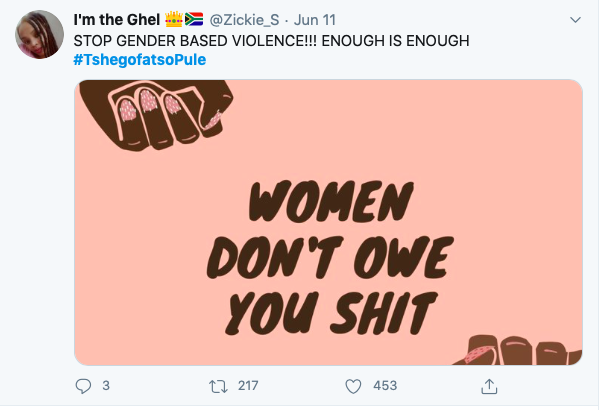 While @thandostillau took to her twitter account to showcase how people like to deflect responsibility when it comes to gender-based violence, “alcohol was banned, women were abused. alcohol is sold again, women are still being abused. men are the problem, not alcohol”. She further tweets “if you are a man and you still say ‘ not all men ‘ then you are also part of the problem.” This tweet received 12 200 likes; 5 400 retweets and 69 comments.

GBV is a crisis

Monday 15 June – Gender-Based Violence continued to dominate social media conversations over the weekend, it was the number one trending topic with 49 294 mentions.

And the list of slain women at the hands of intimate partners gets longer and longer – Simbongile Mancotywa was allegedly shot 15 times by her husband. @Thamani tweeted “He shot her 15 times and is out on bail because it’s his “first time”. The police don’t care guys. How many women must die first before there’s justice. They literally said one woman’s death isn’t enough to jail him. Nobody wants to protect us.” The tweet received 2 700 retweets and 3 200 likes.

@Man’s NOT Barry Rouw, tweeted about a woman who was allegedly shot by her husband, who is being sought by police. 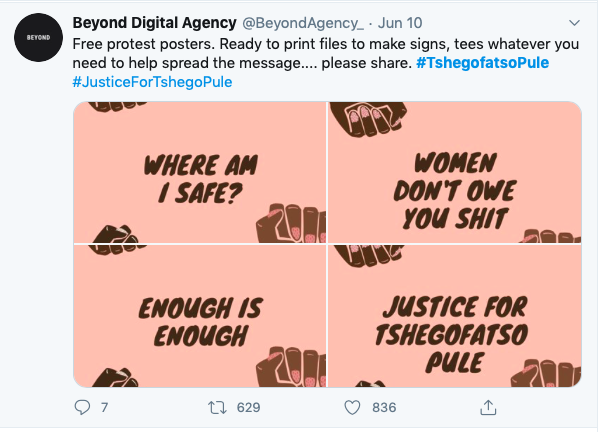 Karabo Mbatha started a petition that has been shared on Twitter. The petition calls for “GBV & violation of women’s rights to be prioritized by the SA government & leaders”. The petition was started four days ago and had 15 255 signatures early today.

Social media users have expressed anger at the lack of attention given to GBV issues in South Africa, with many making comparisons with focus on the Black Lives Matter movement. @EricanSA captured this sentiment: “Floyd was murdered in the USA. SA posted statuses and vented their anger. Days ago in SA, a pregnant woman was brutally stabbed and hung from a tree yet the same energy displayed for Floyd is non-existent for her”. The tweet has been liked 65 000 times and retweeted 24 300 times.

@Tino_Chinyani decried the lack of response from South African men: “The silence on GBV from men in this country is disturbing. Y’all can tweet all day about the PS5 dropping but you can’t stand up when your women are being abused?” The tweet received 1 600 retweets and 3 300 likes by this morning.

President Cyril Ramaphosa and Minister of Police Bheki Cele were also sharply criticised for the rampant gender-based violence crisis. @sijabulile__ tweeted: “Cyril Ramaphosa allocated R1.1 billion last year in September to “help us in the against GBV.” What has that money been used for? How has it helped in the fight? We need answers.” This tweet received 1 600 retweets and 2 800 likes by today.

Issues around the GBV crisis permeate many other topics. A video of four boisterous young men drinking and making fun of Minister Bheki Cele was widely shared on social media yesterday – they were all later arrested for violating lockdown regulations. @NormaarMsiza commented: “The fact that Bheki Cele found those individuals who were mocking him via videos in HOURS but can’t find abusers & murders really baffles me”.@eatzz tweeted a similar sentiment, comparing the swift arrest of the four youngsters in the video with a serial rapist has evaded capture by police for 5 years. The two tweets received just under 5 000 retweets and 10 000 likes combined.

The killing of choreographer and gender activist Kirvan Fortuin trended by volume and burst, and #JusticeForKirvan was widely shared as social media users expressed their outrage. @Mihlali_Adams, tweeted: “A 14 year old killed a queer person yesterday. Remember this the next time you give children a pass for their homophobia. Things like this cost people their lives.” The tweet received 21 400 retweets and 46 900 likes.