Back to school false start

Teachers, parents and pupils waited to hear if schools would reopen 01 June. On Sunday evening 31 May Minister of Basic Education, Angie Motshekga, explained that many schools were not ready to re-open; 3 000 of them had not yet been supplied with water. The Western Cape however decided that learners would return to school on the originally agreed upon date (01 June 2020), one of them being Table View Primary, where teachers dressed as superheroes to welcome pupils back. 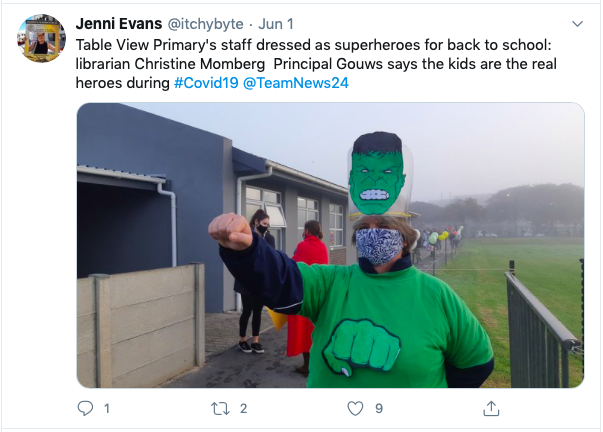 Twitter users expressed frustration over Motshegka’s late announcement that schools would no longer be allowed to open on 01 June 2020. In response to a tweet by @News24 one twitter user asked, “But did you not know at Sunday morning 9am that you would not be ready? Why wait until 6pm?”. Motshegka and the ANC government are receiving strong criticism as people call for more consistency in these uncertain times.

After a full two months prohibition, liquor shops across the country were finally allowed to start selling alcohol again on the 1st of June. @TeamNews24 tweeted a video showing people standing in line and dancing outside the Makro Liquor Store in Silverlakes, Pretoria, it’s been viewed more than 18 000 times.

Not everyone is celebrating though – Julius Malema addressed the public highlighting the dangers of alcohol in the fight against the pandemic saying, “Alcohol contributes nothing”. The tweet, which contains a video of Malema saying “comrades, lose votes on principle” has received over 2 000 likes and retweets and the video has been viewed close to 40 000 times.

Health Minister Dr Zweli Mkhize also urged the public to not panic buy and over-indulge in alcohol. Excited members of the public continued to show their happiness by tweeting videos of themselves drinking beer. One tweet in particular, which was posted at 09:18 and says “My first Corona”, shows the video of someone gulping down a Corona Extra beer and loving the taste. The post has been retweeted more than 1 000 times and the video has been viewed more than 200 000 times.

On Tuesday 02 June the High Court in Pretoria ruled that lockdown levels 3 and 4 regulations, drafted in response to COVID-19, are invalid and unconstitutional. The court granted Minister of Cooperative Governance and Traditional Affairs Nkosazana Dlamini Zuma 14 days to consult with her ministers, and to review and republish the lockdown regulations, ensuring they are aligned with the Constitution.

Mixed emotions ensued with some celebrating the achievement of our democracy while others asked if judges can be held accountable for the number of deaths that could possibly follow.

@ThuliMadonsela tweeted that evening: “There would have been a lot to learn from this judgement if it were more clear, concise, accurate, professionally reasoned and persuasive. I’d be surprised if in its current form it survives the scrutiny of a higher court”. This post was retweeted more than 230 times and received close to 500 likes at the time of writing.

South African social media and news outlets were dominated by conversations around incidents of SAPS and SANDF brutality, sparked by the global protests over Floyd’s death at the hands of police in the US.

One retweet by the Claude Leon Foundation Chair in Constitutional Governance at the University of Cape Town, @pierredevos, shed light on the history of police violence in South Africa: “Unfortunately, police violence did not start with lockdown. IPID Repo2018/19 states: number of deaths in police custody: 214; number of deaths resulting from police action: 393; number of rapes by police officers: 124; number of reports of assault and torture 4 105.” This tweet gained traction, with 269 retweets and 293 likes.

Proof that not even a pandemic can stop criminals -two heists trended on social media first week of June. One was a Cash-in-Transit (CIT) robbery in which criminals crashed into a CIT van, which was then blown-up. This happened in Kagiso, just south of Krugersdorp. Cash was strewn all over the streets and the videos of passersby walking around collecting money trended online. @stolencarRSA posted a video of the explosion with the caption “Yeeeeerrrrrrrrrrr🙆🏾‍♂️too much explosives”. One commentator replied “These guys are amateurs, how they drove straight

into the CIT van was stupid, and the amount of explosives they used was too much. They blew the entire loot away. I won’t be surprised if they post their actions on social media”.

Another robbery that made headlines was the story of a group of men who committed an armed robbery at a Checkers while dressed as health inspectors. @BOSBEER2006 posted a video of the men walking into the Checkers in Scottsville Mall in KwaZulu-Natal. Responses were divided between those who were impressed by the brazenness of the act and those who were disgusted by it.

It’s the story that’s just not going away. Under Level 3 tobacco products can still not be sold. Both British American Tobacco SA (BATSA) and the Fair Trade Independent Tobacco Association (FITA) are once again taking government to court over the continued ban.

The reasoning for the government’s ban on cigarettes during lockdown continues to be contested. News outlet, @TimesLive, tweeted “The government’s claim that banning cigarette sales would make people give up smoking is “untenable and not supported by evidence”.“ Attached to the tweet was an article titled “Ban on cigarettes will not make people quit smoking, FITA tells high court”. The tweet generated 21 retweets and 57 likes.

The tweet gained traction with 177 retweets and 262 likes. The tweet comes two days after a Gauteng High Court ruling declared the country’s Level 3 and Level 4 lockdown regulations invalid and unconstitutional. Some expressed dissent over the government’s decision to appeal the judgement. @SAfmnews tweeted “Legal expert, Ulrich Roux, says he is disappointed by government’s decision to challenge the High Court’s decision on the lockdown regulations. Roux says government’s move will negatively affect public confidence in the executive. #sabcnews“ The tweet received 27 retweets and 60 likes.

On Twitter South Africans took to celebrating our nuanced use of the English language over the weekend. @MuhammedAsmal4 tweeted on June 5th that “South Africa is the only place where “don’t lie” means tell me more“. The tweet received 1800 retweets and almost 7000 likes. Others responded with similar “South Africanisms”.

Another humorous tweet that received much attention was posted by @dannyeurl. He tweeted on June 5th, “the only ex i miss is ex-tra money”. This received almost 300 000 likes internationally, and over 1000 mentions locally.