As Africa Day celebrations kicked off on the Monday morning, President Cyril Ramaphosa’s message commending the continent was the top post by reach and impact: “As countries around the world battle to turn the tide against the pandemic, Africa has taken firm control of its destiny, by developing a clear strategy and raising financial resources from its member states”. The tweet received over 2 000 likes, retweets and comments.

#AfricaDay and #TheAfricaWeWant trended, and while most social media users commended the President for his leadership during the pandemic, some vented their frustrations around Level 3. Many asked why schools were being opened and alcohol sales being allowed, while others voiced their concerns around corruption and ineptitude and demanded their R350 social relief of distress grant payment.

The day the President announced that religious gatherings of no more than 50 people would be permitted under Level 3, there was a spike in the conversation that night:

At 19:59 @TomEatonSAtweeted “Just so I’m clear: at level 3, we *will* be able to go into a church with 49 people we don’t know and whose personal discipline around Covid hygiene is unknown to us, but we *won’t* be able to visit the homes of friends or family?”. This post had already been retweeted over 1 000 times with close to 3 000 likesby this morning.

The EFF’s @MbuyiseniNdlozi, who became very vocal against the move to level 3 last week, asked: “what’s next? If you say churches must open, what grounds do you have to deny these other spaces to also open?” This tweet was retweeted 1 000 times and had close to 5 000 likesby this morning. One responder commented that it was easier to control 50 people in a restaurant than in a church, so we should be allowed to open everything.

At 20:48 @SayEntrepreneur tweeted @CyrilRamaphosa to cancel the lockdown ,asking why churches were being prioritised over other gatherings.

Social commentator Tumi Sole’s post from 26 May continues to gain traction, reflecting public sentiment. This post refers to South Korea and states “I’m just reminded of #Patient31. Also, have we not learnt anything on churches being epicenters of COVID-19?”. The post received almost 3 000 likes, retweets and comments.

Mmusi Maimane, former leader of the DA, sought public opinion on #churchisessential, asking: “When should our houses of faith reopen?”. The poll received nearly 9 700 responses: 69.8% said “when it’s safe to open”, compared to only 10.4% supporting the planned opening on 1 June. Radio 2000’s poll received over 400 responses: nearly 50% of respondents answered with “Big Mistake”, around 12% were happy churches would finally open, and about 27% said: “Let’s open everything now”.

With the horrifying murder of George Floyd at the hands of a policeman in Minneapolis, “police brutality” unsurprisingly became the day’s 2nd biggest topic by burst and was driven mainly by a tweet made @PrettyboiiDB-9 that went viral with over 200 000 likes.

Twitter users were unanimously angered by the news of Floyd’s death. Responders commented that they did not understand hatred, and this killing was not even police brutality, it was cold blooded murder.

@MbuyisenNdlozi tweeted: “They have done it again, Killed another black man…Anti-black racism is a global permanent pandemic”. His tweet was liked more than 2 000 times and has been retweeted close to 700 times, making it the 3rd highest by reach on the day.

Minneapolis and other cities in the US have since experienced protests, with some criminal elements using it as an excuse to loot stores and set fire to cars and shops.

And in other Covid-19 News

With international news about the rising global death toll driving conversation on social media, a tweet by @goodable went viral with over 60 000 retweets and close to 300 000 likes. It shows the smiling New Zealand Prime Minister Jacinda Ardern: “This is what winning looks like”, it says, announcing that the country no longer has any patients being treated for coronavirus in hospital.

Conversely the US coronavirus death toll had topped 100 000 and Brazil has over 29 000 deaths and a spike in new cases. @ZBCNewsonline tweeted that Zimbabwe had recorded 76 new cases, 75 of whom were people returning from South Africa and Botswana. The post has already been retweeted 245 times, sparking conversation about Zimbabwe closing its borders to South Africa and Botswana.

As we enter the third month of this pandemic, the impact on the South African economy deepens. With more people seeking economic relief, SASSA has been criticised for its inefficiency in paying out grants.
@AdvoBarryRoux tweeted a photo of people wrapped in blankets outside the Mdantsane City SASSA offices, waiting from 18:00 the previous night for the offices to open at 08:00. The tweet was retweeted 115 times, with comments expressing sympathy for their plight. 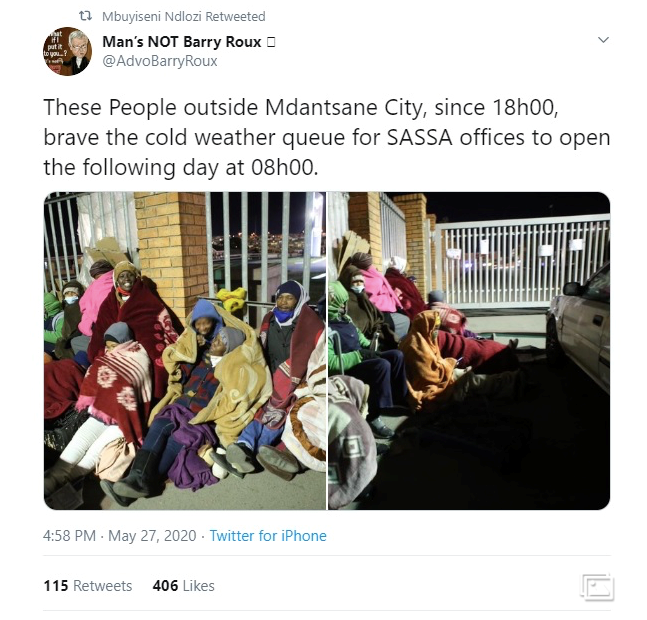 Kwaito star L’vovo Derrango released a video pleading with President Rhamaphosa for financial relief. @eNCA tweeted the video, which was aired on national news. L’vovo explained that although he would be fine, there were many in the media industry who were struggling and needed financial support.

Minister of Co-operative Governance and Traditional Affairs Nkosazana Dlamini-Zuma became a headline topic once again after her briefing to the National Council of Provinces on Tuesday 26 May, stating that unemployment was expected to reach 50%. She said “Our economy has declined, not only because of the lockdown but because we have been downgraded and we have about a thousand companies whose employers have applied for UIF. The tourism sector in particular will be the hardest hit because we have closed the borders of the country and we have closed tourism in the country. Some of the businesses will not survive and vulnerable households have lost a lot of income.”

Western Cape Premier Alan Winde said the national backlog for COVID-19 testing was 100 000 tests. Winde said the WC provincial testing strategy had changed: instead of testing as many potential contacts of confirmed cases as possible, tests were now reserved for patients in hospitals.

Later in the day, @News24 tweeted confirmation that the Department of Health acting DG, Dr Anban Pillay, said the National Health Laboratory Services had a backlog of 80 000 tests for COVID-19.

28 May – Twitter account @Propaganda24 tweeted for the first time since 2018: “Ramaphosa says that Coronavirus regulations will remain in place until the middle class is completely eliminated”. By Friday morning the post had been liked 268 times and retweeted 153 times.

In another attempt to spread social discord, the self-proclaimed fake news page went on to tweet at 20:36 that “Dlamini Zuma says the communist takeover of South Africa is well on track. The Whites don’t even realise, they are all watching DSTV.” This post was retweeted 74 times, and not all readers seem to be aware that the quote is fake and the account is a parody account. Some commented that the current ANC and EFF are “black Nazi’s” or “Zimbabwe 2.0”.

At 21:00, the account tweeted more false information, saying government had unexpectedly lifted the ban on the sale of cigarettes at level 3. The sale of tobacco products remains banned under level 3. Once again we urge you to think before you share and only share news and information from sources that are credible and trust-worthy. This account is clearly mocking the state of South Africa during the COVID pandemic.